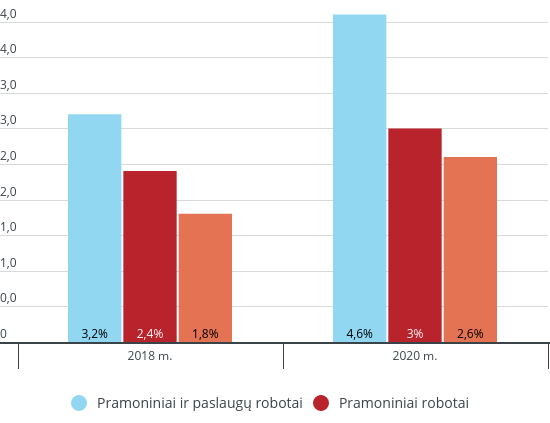 Statistics Lithuania has calculated that the number of Lithuanian companies using robots has increased from 3.2 to 4.6% in two years. Looking at the numbers, it is difficult to talk about the promising breakthrough, but experts say that, although not fast enough, Lithuanian business is digitizing, and 1.4% growth is not as modest as it may look like.

This announcement was prepared on behalf of an article published on July 27th by Verslo Žinios. Find the Lithuanian original version HERE.

The last time robots at Lithuanian companies were counted by Eurostat. Based on these data collected in 2018, Lithuania was one of the least robotized countries in Europe.

“Although the demand in the market is huge, there are not many robots in Lithuanian companies. As labor resources dwindle, this becomes especially important,” said Kęstutis Šetkus, then director of the Agency for Science, Innovation and Technology (MITA), who promised that we should have a breakthrough soon.

At the beginning of this year, when the number of robots was counted by the Department of Statistics, it was announced that, at the beginning of the year 2020, 4.6% of companies with more than 10 employees used robots, compared to 3.2% two years ago (no data were collected in 2019).

First of all, it is observed that, although the increase in the share of robotic companies from 3.2% to 4.6% does not appear to be significant, it in fact means that the number of companies using robots has increased by 30%.

“In the leading countries, the growth rates are consistent and fluctuate between 20-40%,” notes E. Tauraitė-Kavai. The context of time is also important.

“The main challenge for robotics is the digitization processes that enable it. If you have a simple production line and want to robotize it, you have to automate it first, then all the processes have to be digitized, connected to the system and only then can robotization be performed,” says the expert. She notes that many industrial companies in Lithuania are already automated, and we also look good in terms of the scale of digitization.

Justinas Katkus, founder of Factobotics (member of the Lithuanian Robotics Association), which offers robotics solutions to the industry, also invites to calculate. When counting robots in companies, Statistics Department only surveyed economic entities with more than 10 employees – 5,204 industrial enterprises and 8,403 service enterprises. “In general, only 12.7%, or 13,607, of all Lithuanian companies can be robotized, because all others are micro-enterprises,” says J. Katkus. This means that in 2018, 435 Lithuanian companies had robots. At the beginning of 2020, – 626. “191 companies were robotized in two years. The tendency is good – Lithuania is digitizing”, states J. Katkus.

The ball is on the business side

According to one of the founders of Factobotics, the speed of robotization in Lithuania is much too slow. E. Tauraitė-Kavai says that the main challenges are not due to robotics specialists, but due to the specifics of the industrial sector – low wages, low production volume and outsourced production, which creates less added value, still prevail here. “As a result, the motivation to robotize is low, as it would not significantly reduce costs and payback would be slow, and in the short term competitiveness may even decrease,” says the MITA expert.

Remigijus Laurutis, the head of the robotics company Nord Robotics, who was recently interviewed by VŽ, also said that although the demand for robots in Lithuanian companies is growing, businesses, especially the food industry, still need to be persuaded to robotise.

We will educate producers

Although the Lithuanian robotics ecosystem – both service providers and users, according to E. Tauraitė-Kavai, is still being formed, the sector has the potential to create high added value. At present, Lithuania has 5 robot companies, which create unique robots for manufacturing companies, and 15 companies offering robotics solutions. “This year, the EU is launching a network of European Digital Innovation Centers (ESICs). Several of them will be formed in Lithuania as well. One of the goals of this network will be the robotization of the industry, providing consultations and developing individual robotics solutions. In addition to these services, digitization support measures for the purchase of equipment are repeatedly announced,” E. Tauraitė-Kavai names the preconditions for further development. And President Gitanas Nausėda, returning from the European Council, mentioned the digitization of industry as a priority with European support. “Lithuania will have excellent opportunities to finance green economy and digitization projects, which will be a priority of our activities for the next seven years,” the President said.

Digitization of Industry: Robots are Getting Closer to Manufacturers
Scroll to top

This site uses cookies. By continuing to browse the site, you are agreeing to our use of cookies.

We may request cookies to be set on your device. We use cookies to let us know when you visit our websites, how you interact with us, to enrich your user experience, and to customize your relationship with our website.

Click on the different category headings to find out more. You can also change some of your preferences. Note that blocking some types of cookies may impact your experience on our websites and the services we are able to offer.

These cookies are strictly necessary to provide you with services available through our website and to use some of its features.

Because these cookies are strictly necessary to deliver the website, refuseing them will have impact how our site functions. You always can block or delete cookies by changing your browser settings and force blocking all cookies on this website. But this will always prompt you to accept/refuse cookies when revisiting our site.

We fully respect if you want to refuse cookies but to avoid asking you again and again kindly allow us to store a cookie for that. You are free to opt out any time or opt in for other cookies to get a better experience. If you refuse cookies we will remove all set cookies in our domain.

We provide you with a list of stored cookies on your computer in our domain so you can check what we stored. Due to security reasons we are not able to show or modify cookies from other domains. You can check these in your browser security settings.

These cookies collect information that is used either in aggregate form to help us understand how our website is being used or how effective our marketing campaigns are, or to help us customize our website and application for you in order to enhance your experience.

If you do not want that we track your visit to our site you can disable tracking in your browser here:

We also use different external services like Google Webfonts, Google Maps, and external Video providers. Since these providers may collect personal data like your IP address we allow you to block them here. Please be aware that this might heavily reduce the functionality and appearance of our site. Changes will take effect once you reload the page.

The following cookies are also needed - You can choose if you want to allow them: